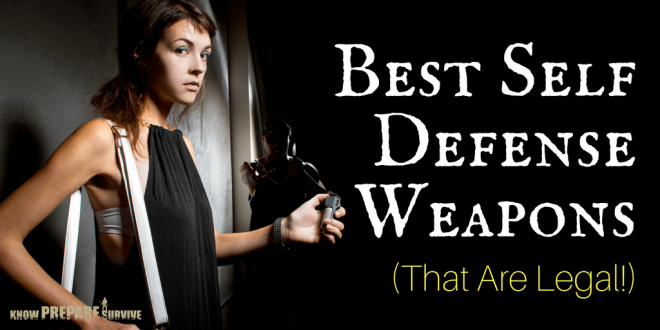 In a perfect world, no human would enact violence upon another person.

But we do not live in a perfect world and violence is common.

I’ve witnessed violent attacks with my own eyes.

No matter how many precautions you take to avoid getting into a bad situation, trouble may still find you.

When that happens, you need to know how to defend yourself.

A good weapon can keep you from being turned into a statistic.

So, what are some good self defense weapons? 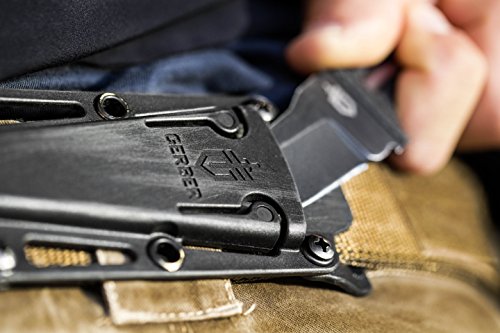 They are useful for many tasks, from normal everyday tasks to wilderness survival.

Something else they can do is save your life in a fight.

Now, fighting with a knife is not something to be done lightly.

Defending yourself with a knife can be effective but you have to know how to fight with your knife.

So brush up on your anatomy and practice using your blade.

Also, be prepared to get cut as well.

Despite these warnings, knives have many advantages over other self defense methods.

For one, they are primarily a tool.

This means that they are legal in areas where firearms, stun guns, and pepper spray may not be.

They can be inexpensive and are, often, very concealable.

If you are thinking about picking up a knife for self defense, check out our guide on such knives here. 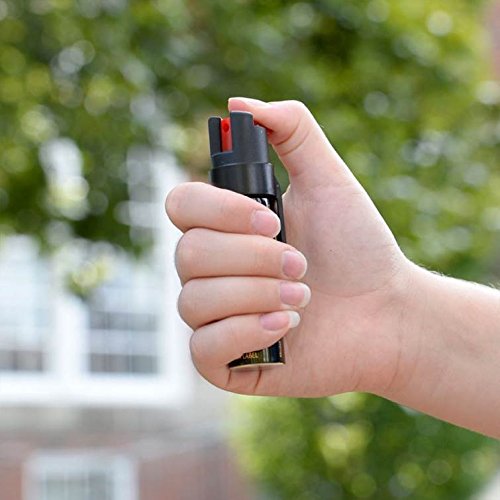 Pepper sprays fire a stream of oleoresin capsicum, which is a spicy oil extracted from hot peppers.

If you’ve ever cut peppers then rubbed your eye, you know why this can be debilitating.

It hits the eyes, nose, and lungs, incapacitating your attacker.

Pepper spray is good against animals as well!

Pepper spray is legal in every state, but there may be limitations on the size or strength you can carry.

Unlike the other weapons on this list, pepper spray contains propellant that can escape from the cylinder over time.

Make sure to fire a half-second test shot at least once a year.

Like any weapon, it’s good to practice using pepper spray.

For this reason, some manufacturers sell inert canisters.

Chances are, if you’ve ever been to a gun show, you’ve heard the electric crackle of someone demonstrating a stun gun.

Also called electroshock weapons, they use millions of volts of electricity to stun your attacker. 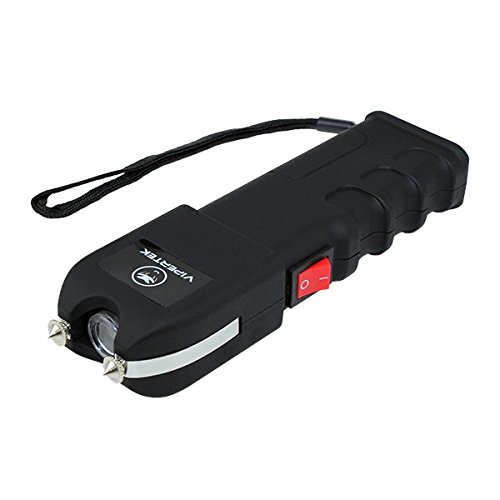 Plus they’re loud and bright, so just demonstrating one can sometimes turn a would-be mugger away.

If they continue to come at you, hold down the button and jab them with the live end of the stun gun.

Electricity will course through their body and temporarily disable them.

Don’t be scared off by the millions of volts. Amps are what kill, not volts.

So unless your attacker has a pacemaker, chances are you won’t permanently harm them.

If you do, well, it was self defense…

But because of that chance, stun guns are considered less-than-lethal devices instead of non-lethal.

Stun guns also have a weakness in that they are electronic devices.

This means that you have to ensure they are charged.

You don’t want to find out you have drained batteries as someone tries to attack you.

You don’t need to carry around a large baton to thwack someone with a heavy blow.

Kubatons are small sticks, about the size of a thick pen, which can be used to concentrate the force of your blow. 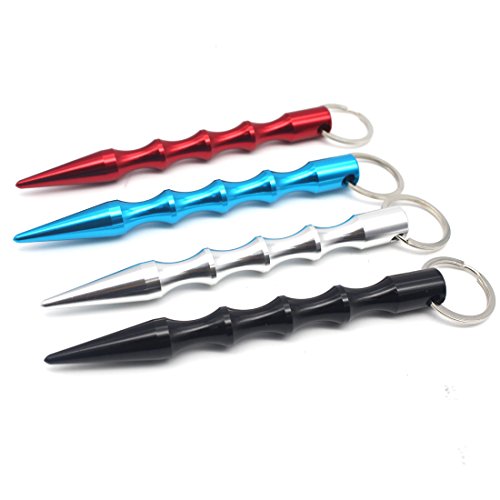 Because they’re small, you can carry them on your keychain and most people won’t bat an eye.

Hold the Kubaton in your fist.

You can punch with it, “stab” with it, or jab with it.

Every little bit helps in a fight.

Other rod-like objects can be used in a similar way.

In fact, some companies make tactical pens that can be used to defend yourself.

You can even use a tough hairbrush or electronic cigarette as a Kubotan!

Speaking of keychains, why not carry some paracord around with you in the form of a monkey’s fist?

You can use it as a key fob. 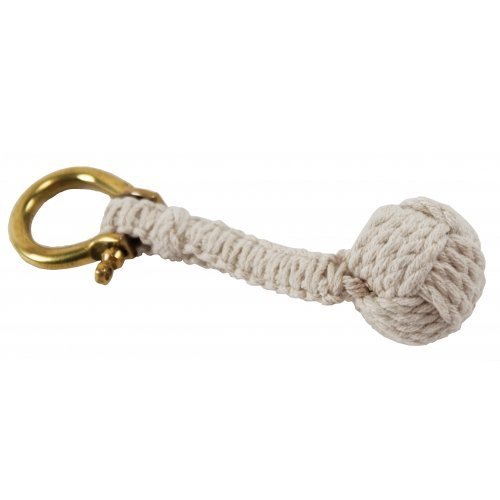 Oh, and since there may be a weight inside, it’s a weapon as well.

Also called a slungshot, sailors have been brawling with these for a long time.

They are also easy to make at home.

Hold the end of the cordage and swing the knot to strike at your assailant.

Or you can loop the cord around your wrist for a more secure hold.

Some states do have restrictions on this type of weapon thanks to those brawling sailors.

The laws will call it either a slungshot or slingshot.

Flashlights can be used to do more than flash light.

If they have a heavyweight metal body, flashlights can be hefty. 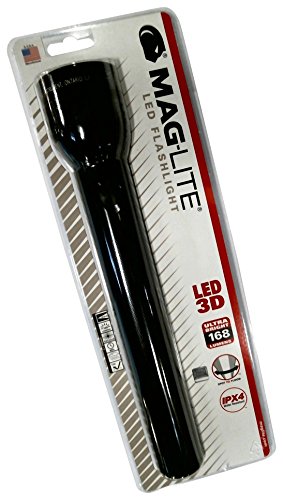 This makes them quite capable as an improvised striking weapon.

Also, some models have an aggressive face that increases the damage you can do when you thrust the flashlight into an attacker.

But you don’t even have to strike with a flashlight to use one as a self defense tool!

Light is a great deterrent.

Light can also be used to blind an assailant.

So you want to make sure that your flashlight is as bright as possible.

When they are blinded you can either strike them or use the opportunity to escape the situation.

A dollar store flashlight will not be bright enough to blind them. Get something high-quality.

Surefire flashlights are an excellent choice.

Flashlights for Self Defense on Amazon 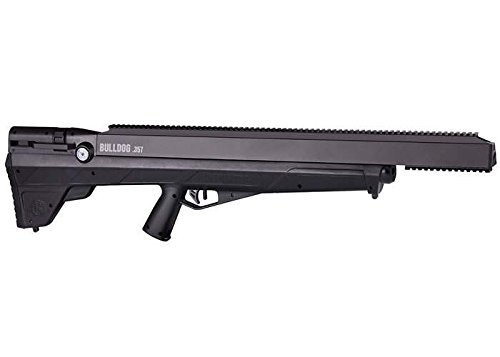 You mean those things people use to knock over tin cans?

Sure, there are many weak air guns out there, not able to defeat anything stronger than paper.

But air guns have also been used as a weapon of war since the 18th century.

Lewis and Clark carried Girandoni air rifles on their expedition, to great effect.

Modern ones are even better.

Sure, most are only good for squirrels.

But some can be used to take down deer and hogs.

A couple of these air rifles can be used for self defense.

If you live in a place where they’re legal…

…and you know you won’t hit an innocent bystander… 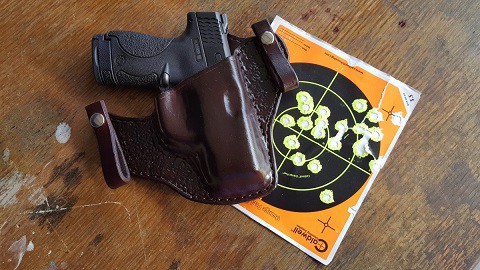 …a firearm is the most effective tool for self defense.

Just make doubly sure that you are skilled and knowledgeable enough to use them properly.

Handguns are concealable enough to protect you when you’re out and about.

The best pistol is the one with which you are most comfortable and will carry.

While at your house, you can use bigger guns.

Bigger guns have stocks, which you can shoulder, which improves handling and stability.

Shotguns are an old standby, but why an AR-15?

Simple. Light and fast rounds like 5.56 are less dangerous in an urban setting than heavy and slow bullets.

When the FBI tested the penetration of rifles and handguns through drywall, they found that the 5.56 rifle had LESS wounding potential than the pistols they tested. 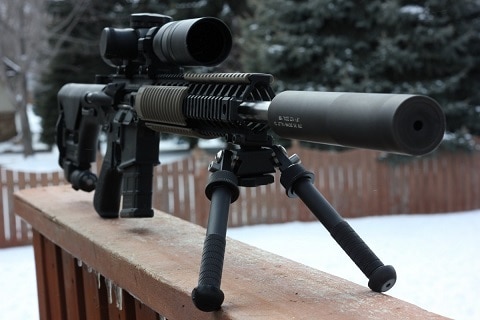 The 5.56 bullets deflected, fragmented, or disintegrated while the handgun rounds just punched through.

To capitalize on this, use XM193 or specially-made frangible ammo.

The heavier and more capable bullets such as XM855 are much more likely to overpenetrate.

Lastly, there are self defense weapons you were born with.

Your hands and feet.

You will want to learn how to fight properly.

When properly trained, your fists can be deadly weapons.

I remember the number one self defense technique taught to me by my martial arts sensei.

It was his favorite move to use in a dangerous situation.

Take your feet and…

A Note on Legality

Self defense laws vary by state. So, learn your laws! 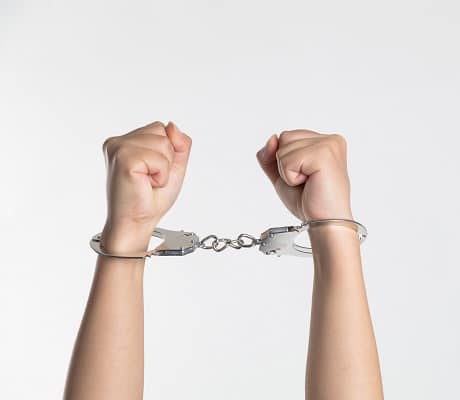 Some people say that it is better to be judged by twelve than carried by six.

Well, I’d rather neither be carried nor judged.

Remember that once the attacker is no longer a threat, you need to stop using lethal force to defend yourself.

For this reason, it is a good idea to attend a self defense class.

They’ll cover the legal minutia you need to know.

The goal isn’t to win the fight, it’s to survive.

Winning fights is for athletes in the ring.

On the street, when you need to defend yourself, getting out of the situation should be your first priority.

But you won’t always be able to escape.

That’s why you should know how to take advantage of everything possible to defend yourself. 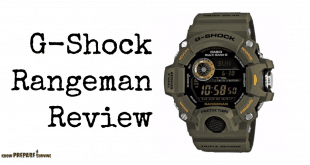 Looking to join others who may have been charged with misdemeanor for having kitty cat self defense key chain going through TSA in Honolulu. My honor student good daughter is facing misdemeanor charges for the key chain in her back pack. This is no t ok to persecute women who have been stalked and followed and wand to carry something to protect self in n case of being attacked.
Please contact me
Maura
alohaqb@yahoo.com

If you were charged with that, then it was your own fault. they give you several opportunities to put that in a checked bag, or say something about it and you might have been able to keep it. also you wouldn’t need one in the airport anyway, with thousands of people going in and out each day, security guards, and cameras. no ones going to try and rape you in the middle of an airport. I agree it is a good idea to carry protection, but women arn’t the only people that need it either. men are attacked too, and they arn’t allowed to carry knives in an airport either.

No one has ever been hurt in an airport, or aboard an airplane…DUH! Nice job pointing out that one “Steve”! You effin’ trollop!

What a surprise. Two men (probably caucasian) who weigh in on when/how women and people are attacked. What if someone didn’t check luggage, you idiot? Fact of the matter, you can bring scissors on a plane – so do that next time and if Fred or Steve act up — take a stab at it.