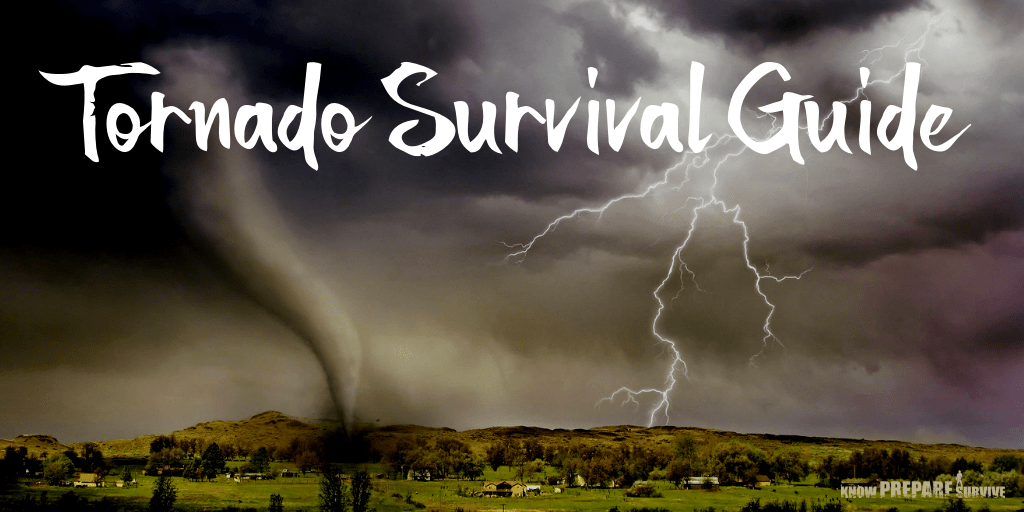 Nearly everyone who lives in the American Midwest has a tornado story.

Here’s one of mine:

The closest I ever came to a tornado was one which skipped over my head.

My family and I were hunkered under the basement stairs when the tornado came.

Thanks to a large, steep hill to our west, the east-bound tornado leaped over our property and demolished the neighbor’s barn, across the street.

When we drove around the area on the following day, it seemed as if our property was the only one untouched by the whirlwind of destruction that had recently passed through.

Though that hill saved us a lot of grief, “build a steep hill!” is not good tornado-safety advice.

But it wasn’t my first (or last!) brush with a tornado.

If you want to know what to do in case of a tornado, keep your head down and keep reading.

How to Prepare for a Tornado 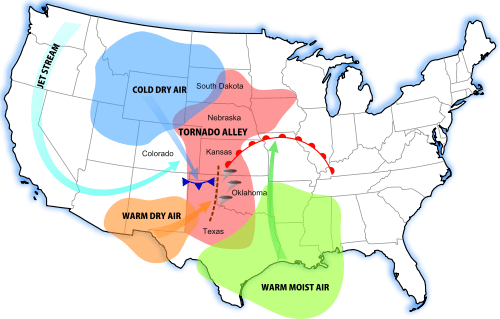 You’re reading about it right now, so that’s a good start!

The United States experiences more tornadoes than any other country, most of which hit Tornado Alley.

The typical tornado season is March through June, but tornadoes don’t buy tornado permits or follow tornado laws, so they can hit any state during any month.

There are three main ways to prepare for a tornado: learn the location of tornado safe spaces and practice, have emergency supplies for the aftermath, and tap into an early warning system.

Emergency supplies for a tornado are much the same as for any other disaster, natural or otherwise, so I will not go into too much detail.

Keep on hand a week’s worth of food, water, health supplies, and any other necessities. If you have a bug out bag, that’s an excellent first step.

Though, it may be difficult or impossible to bug out after a tornado hits because your vehicle or the roads may be damaged.

Tornadoes can easily take down power lines, so a backup generator with spare gasoline or diesel (properly kept) is a good idea as well.

Also, pay attention to local storm shelters, just in case a tornado drops while you’re not at home.

Now, onto the early warning systems…

How to Know if a Tornado is Coming

It’s almost impossible to predict when a tornado will appear.

Officials will put out a tornado watch when the weather is favorable for producing tornadoes, but they can still happen without much warning. 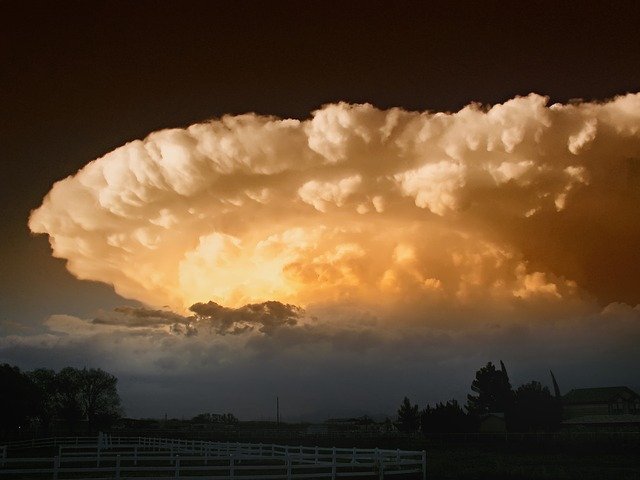 Generally, a tornado forms from what’s called a supercell.

Supercells are large thunderstorms with persistent updrafts which rotate around each other.

The rotations get stronger and stronger until they drop onto the ground in the form of a tornado.

You can’t always identify supercells visually when you’re under one, thanks to the rain and lightning.

If you’re outside the storm and can see it from the side, look for features such as a shape like an anvil or a beaver tail shape underneath.

If you are under the thundercloud and see a lot of spinning in the cloud above you, be on the lookout for tornadoes!

These storms can also produce atmospheric effects which can be felt. There’s often a pressure or temperature drop. The sky turns dark, green, or yellow around the storm.

And sometimes it just feels ominous.

If you’ve ever been around a tornado, you know what I mean.

If you live in a place which frequently gets tornadoes then there will likely be a tornado siren.

Often there is a monthly test of the siren, but if you hear the siren at any other time, get inside and turn on the radio or news to find out the location of the tornado.

But all of those require you to pay attention to something. What if you’re not outside? What if you’re located in an indoor room of your house and can’t tell that the weather outside is frightful?

An emergency weather alert radio is a must-have piece of equipment for your home.

Even if you never use a radio or watch TV, and so can’t see normal weather alerts, one of these radios turns on when NOAA broadcasts a tornado alert.

It’ll be loud enough to wake you up or cut through your music.

Emergency weather radios aren’t expensive, last forever, and can save your life by letting you know about a tornado warning.

How Can I Keep Track of Tornado Watches From My Computer?

It’s a good idea to be aware of tornado watches but not everyone watches TV. Thankfully, NOAA’s National Weather Service has a simple website to show any active tornado or thunderstorm watches in effect across the nation.

You can find it here.

What to Do in a Tornado Warning 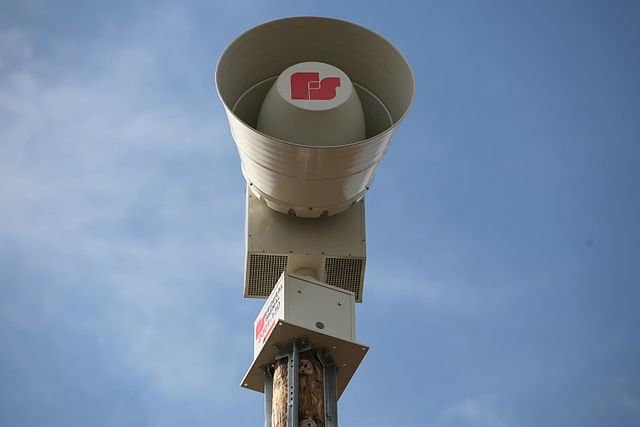 So, the tornado siren is blaring, the weather radio man tells you there’s a tornado warning, and the clouds outside are spinning more than Pete Burns in a 1984 music video.

The first thing you do is tune in to information about the tornado. This can mean the TV. Most of the time this means the weather radio.

Listen to what it says.

Sometimes, the tornado warning will be for a tornado that is far enough away not to affect you.

In this case, stay prepared to evacuate to a tornado shelter.

Stop playing video games or sharpening your knives and get ready to head to a safe place.

If you are in a car, determine if you can get away from the tornado or if you need to stop at a tornado shelter.

You should stay poised to get to safety immediately until the tornado danger has passed.

If, however, you are close to the path of a tornado, or there is any doubt that you are out of its way, get to your safe place immediately. Take the weather radio with you, along with your bug out bag and any pets.

Oh, and other family members, of course.

Safest Places During a Tornado

There are two main considerations for safe places:

Debris, followed by the wind itself, are the two main causes of tornado damage. So, the lower you can go, the less danger there is.

More protection often means more walls. You want to be as close to the center of the building as possible, preferably in a room that has very few weak spots.

Walls are strong against wind, but doors are weak, and glass windows easily explode into dangerous shards.

If you can get under a sturdy table, that’s even better. Then get on your knees, put your head to the ground, and cover your head and neck with your arms.

If you are staying in a house, the safest place is most often in the basement. Preferably away from the door to the basement.

Cellars are also excellent if they are storm cellars. Normal storage cellars can have weak doors.

Without a basement, a closet on the bottom floor is the best choice. Bathrooms can also work, despite the danger of the mirror. In that case, hide in the tub.

Apartments and hotels can be trickier than houses because you may be several stories in the air. During a tornado, you don’t want to be so high!

The first goal is to get as low as possible. Avoid the elevator and travel down the stairwell as low as you can go.

Hotels often have tornado shelters, though you may need to ask about them. Apartment buildings may not, though some do.

Once as low as you can go, find a protected area way from weak spots in the structure. That may be the bottom of the stairwell.

It’s a good idea to scope around the apartment building first and ask about potential safe places.

Cars, trucks, and mobile homes are not safe places in a tornado. 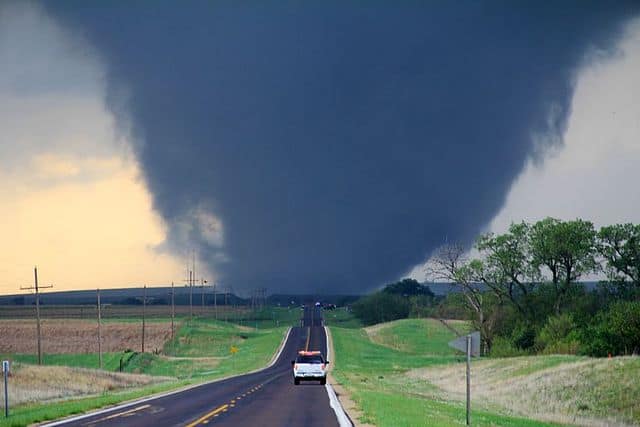 If it’s far enough away, you may be able to escape by traveling at right angles to the tornado.

However, traffic can slow you down and roads can turn around back toward the tornado, so this is a dangerous prospect.

The safest thing to do is get out of the vehicle (even if it’s a tied down mobile home) and get into a sturdy building as soon as possible.

Vehicles and mobile homes are light enough to be lifted by tornadoes. The glass, too, is a huge hazard.

Low concrete buildings without many windows may not always have storm shelters but are often tough enough to basically be a storm shelter.

What if you’re caught outside, with no shelter in sight?

You still have a chance of survival, though this will be much more dangerous than hiding in a house or library.

Remember, get low, then get protected.

Find a ditch or, failing that, a depression in the ground. It should be low enough for your entire body to be lower than the surrounding ground.

This should keep you lower than most of the flying debris.

Lay face down and cover your head and neck with your arms.

If you can, avoid a location that may flood. But flooding is a secondary concern to the flying debris!

Whether or not you live in tornado alley, it’s a good idea to practice tornado safety.

They can hit any state and have dropped during every month.

So long as you know how to get to a safe space quickly and have an emergency weather alert radio, you will be better prepared for surviving a tornado than most other people!

Make sure the rest of your family knows what to do when there’s a tornado as well.

Tornado watches and warnings sound similar, so it’s easy to get them confused. The difference is important, though!

During a tornado watch, the weather conditions are such that there is a good possibility for a tornado to develop. Weather fronts are mixing in a way that is likely, but not guaranteed, to produce a tornado.

A tornado warning, on the other hand, means that a tornado is either imminent or already in progress. One of four of the following conditions has happened:
1. Clouds are rotating
2. Someone has seen a funnel cloud
3. A waterspout is close to land
4. Someone reported a tornado

Any of the first three conditions can turn into a tornado in moments.

Should you open windows to minimize tornado damage?

Tornadoes are often accompanied by a reduction in local atmospheric pressure. You’ll be able to measure this if you have a barometer.

There is a long-standing myth that this can cause houses to explode outward from the pressure differential.

Indeed, houses destroyed by tornadoes often seem like they burst rather than imploded.

The idea, then, is to open the windows and equalize the pressure.

However, that pressure drop isn’t enough to cause any damage.

Outward-falling walls happen when one wall gets damaged enough to allow wind to enter the building then push the other walls outward. It’s not pressure-caused implosion.
Keep those windows closed and keep that rain out!

Despite old advice, highway overpasses are not good tornado shelters.

Sure, they protect against stuff falling on you from above. But during a tornado, the danger comes from debris and the wind from the side. The tornado itself does not have to actually touch you.

Highway overpasses offer practically no side protection, and in fact, can turn into wind tunnels that increase wind speed! 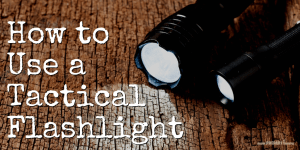 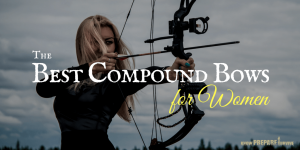 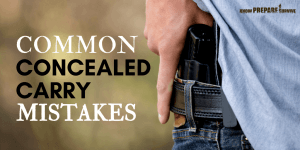 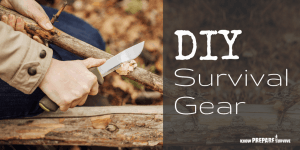