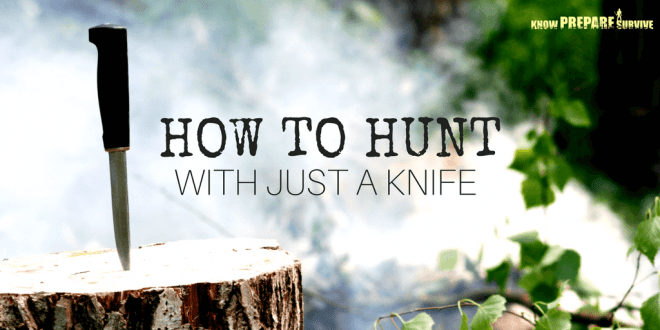 Knife Hunting: How to Hunt with Just a Knife

Hunting with Just a Knife

Imagine this. It is almost halfway through your week-long canoeing trip. Yesterday you were well fed, but an unexpected rock caused a capsize, and while you recovered most of your goods the food container burst open and everything inside was lost.

Such an event has happened to me. I was a bit crestfallen, to say the least. But I survived.

What can you do for food in that situation? After all, I had not been prepared to hunt or fish for my own food. I did not have a gun or rod.

But I did have a knife. I had several knives.

Thanks to having such tools with me, I managed to acquire enough food to survive until the end of the trip. I was not as comfortable as I could have been, but I was not starving, either.

Every person in the outdoors should have a knife. Several, if possible; blades dull, break, and get lost.

It is good to know these skills even if you hunt with a rifle or shotgun. Firearms can be damaged or lost. Even if you never hunt, you might one day find yourself on the edge of the road, many miles to civilization, with no gas and nothing but a knife.

Or maybe civilization itself has gone away and you need to figure out how to get food.

If you have a knife, you have a way to get food. A knife lets you hunt, fish, and build traps.

Of course, a knife has so very many other uses for the survivalist as well.

You can use a blade to prepare fire and food, cut bandages or rope, cauterize wounds, make tools, and even as a signal mirror.

While not ideal for the purpose, you can use a knife as a hammer, screwdriver, or spade. In case a wild animal attacks, a knife is much better than a fist for self defense.

For a survivalist or casual explorer of the outdoors, a knife is one of the best tools to carry. Especially if you keep it sharp.

How do you use a knife to hunt or trap, anyway? Glad you asked.

While it is theoretically possible for you to hunt with just the knife itself, the lack of range will make it very difficult to get close enough to a prey animal for you to strike. You would be better off using your knife to fashion a spear or two.

This does involve hunting, so please follow any applicable laws (if laws are still applicable).

There are many types of spears out there, but basically, they are just a pointy stick you stab into your prey. The point can either be the stick itself, or a knife lashed onto the stick.

The latter is more effective, but you have a greater chance of losing your knife.

If you have one knife, make a primitive spear. If you have several knives or like to live life dangerously (please, play it safe), make a knife spear.

Both types of spears start with the wood used to make the shaft. You want a hardwood branch that is as straight as possible, about an inch in diameter and three to five feet long. Avoid green wood.

Use your knife to trim off any knots or branches that stick out. It may also be a good idea to remove the bark for better grip.

If you are going to make a primitive spear, then take the narrow end, and whittle it into a point. Dig your blade into the wood close to the handle and carve away from you, towards the end of the branch.

Work your way around the wood and further back until the point is sharp.

To improve the spear tip, you can place it under the coals of a campfire. The heat will harden the point and make the spear more effective. Just do not catch it on fire…

For a knife spear, instead of a point we want to create a shelf. Lay the handle of the knife alongside the end of the branch and mark where the bottom of the handle comes to.

Then take your knife—which better be a fixed blade for this step—and baton into the branch to split the wood.

Once you have reached the place marked before, break off one half of the wood. Place your knife handle into the shelf, and lash it as firmly as possible to the haft of the spear.

You can try to spear fish with a normal spear, but they tend to dodge out of the way. Light refracting through the water makes it difficult as well. A better design for a fishing spear turns the one point into four, at a bit of a distance from each other.

Wrap some cord around the haft of the spear, about a foot from the end. This is to prevent the haft from splitting too far.

Take your knife and baton halfway to the cord. Then remove your knife, rotate things ninety degrees, and baton down again perpendicular to your first split.

Once this split reaches the cords, remove the knife and finish the first split.

Take two twigs, about pinky sized and slightly longer than the width of your spear, and jam them down into the splits. One each direction.

The spear should be splayed out. Tie the twigs in place with the cord, then whittle the four points the same way you would a primitive spear. Happy fishing!

It’s not just good for fishing, either. Frogs can make for good eating, too!

Hunting with a spear can take a lot of effort in order for you to finally catch game. Why not make some traps first? You can set them up and forget about them. Uh, for a time.

Please do not actually forget any of your traps and leave them behind. Always recover your traps before you leave an area for good.

For any of these traps, you want to place them someplace where game animals will actually be. Look for signs, such as droppings or trails, and place the traps accordingly. Placing them between shelter and water can also be a good idea.

Trapping is often more regulated than hunting. If you are testing these skills, please make sure to follow your local laws.

This trap looks a bit like the number 4, except with a rock balancing against the top. An animal takes the bait under the rock, disturbs one of the sticks, and WHAM! Rabbit stew dinner!

To make one, you will need a heavy weight, such as a large rock or even larger log. Please do not use something light, we want to kill the animal in one strike and minimize any suffering.

One of the rocks needs to be flat. This one will be on the ground. It may be a good idea to dig into the ground so this rock is flush with the soil. You want both sides to be a hard surface, see.

You also need three sticks. One vertical one diagonal, and one horizontal. 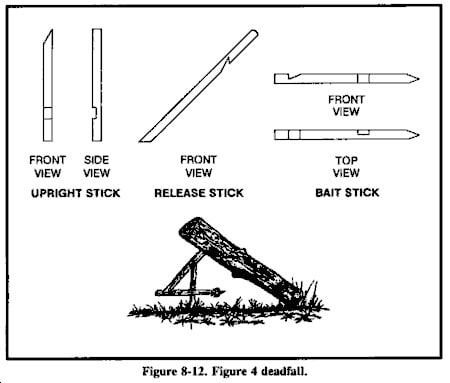 The vertical stick, the support stick, is set on the bottom rock. Its bottom should be flat, and the top whittled to a chisel point similar to a flathead screwdriver.

This will rest in a notch on the diagonal stick.

The vertical stick should also have a notch near the bottom, perpendicular to the chisel on top. Cut into the wood at ninety degrees, then carve into it from below.

Keep going until you are about halfway through the stick, keeping the top of the carved area flat.

The diagonal stick should have a notch carved into it, close to one end. The ninety degree section should be close to the end which will hold up the heavy weight.

This is where the chisel point of the vertical stick rests.

At the other end of the diagonal, carve a chisel tip. This one will go into the bait stick.

To assemble the trap, put some bait onto the end of the bait stick, on the far end from the notches. Put the vertical stick onto your bottom rock, put the diagonal stick on top (chisel point in notch), and keep holding the sticks together.

Lay your weight on the top end of the diagonal stick, as close to the end of the weight as possible. Slowly release to make sure it holds. Then put the bait stick in there, with the notch by the end holding the diagonal and the notch in the middle inside the vertical’s notch.

Let go, and if things are balanced, it will stay in place. When an animal comes and disturbs the bait, the bait stick will move, release the diagonal, and the weight will come crushing down.

Never put your hand under the weight! This is a sensitive trap and you do not want to lose your hand if the trap releases accidentally!

If you have cord or wire, an easier trap to make could be a snare trap. For this one you will need a sapling and two pieces of wood, one as a peg and the other as a hook.

Take the piece of wood that will be the peg, and whittle one end into a point. On the other end, carve a notch. Like with the figure 4 deadfall trap, these notches should all be with one end at ninety degrees. In this case the ninety degree area should be the top.

Take the other piece of wood and carve another notch, this time with the ninety degree part at the bottom. You should be able to place the two flats so they hold each other.

Find your sapling. It should be strong enough to hold a dangling animal. About six to twelve inches from the end, tie your cord. Tie the other end of the cord to the top of the hook stick.

Drive the peg into the ground, then lower the hook and connect the two notches. The sapling should be about a ninety degree angle, and slightly disturbing the hook should release the trap.

If it works, tie a noose to the very bottom of the hook stick. Fill it with bait. When the animal comes and eats the bait, it should touch the hook and trigger the trap, leaving it dangling in the air.

The most simple trap to make is a pitfall trap, though maybe not the most humane.

Dig a hole in the ground, about as deep as you can reach without getting in.

Take your knife and a bunch of branches. Whittle spear points into them, then stick them into the bottom of the pit.

Cover the top of the pit loosely with large leaves and fragile twigs, so when the animal crosses over they break through and fall onto the spikes. Bait can help as well.

I would stay close by to end the animal’s suffering, as the fall may not kill it.

Have a knife? You can get food. Prepare and place some traps, then go hunting or fishing. With patience and practice, a simple knife can be all you need to fill your belly and survive another day.

Share
Previous Pemmican: What it is, How to Make it, and Recipes
Next 2020’s Best EDC Pocket Knives 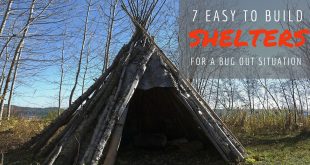 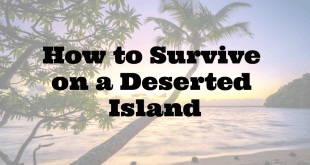 Stranded and Alone: How to Survive on a Deserted Island 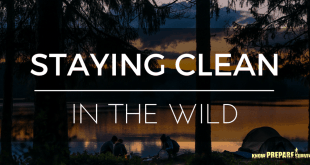 Staying Clean in the Wild: The Natural Way